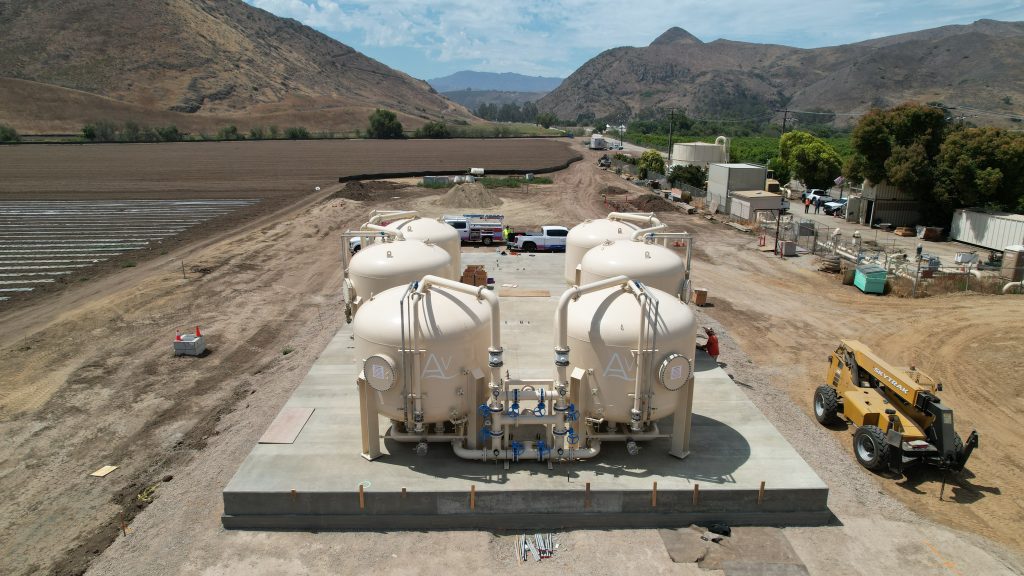 The GAC tanks being set at the Conejo Wellfield.

Camrosa is building a new water treatment plant at the Conejo Wellfield, located along Hill Canyon Road in the Santa Rosa Valley. Construction got underway in the spring of 2022 and is expected to be complete by the end of the year. This project will return the Wellfield to service, offsetting approximately 30 percent of our demand on expensive—and currently scarce—imported State Water Project water.

For years, the District’s guiding strategy has been “Building Self-Reliance.” This primarily means reducing our dependence State Water Project water that we import from Calleguas Municipal Water District, a Metropolitan Water District wholesaler. Districtwide we’ve accomplished this by building separate non-potable and recycled water distribution systems that have shifted half our customers’ demand off the drinking water system. Most of the agricultural irrigation in the District service area and about a quarter of municipal irrigation is met with these non-potable sources.

Within the drinking water system, the District has nine groundwater wells that contribute to the potable system, including one that feeds the Round Mountain Water Treatment Plant, a one-million-gallon-a-day brackish groundwater desalination facility. Each acre foot those wells produce is one less of State Water Project water we have to import. Four of those wells, clustered along Hill Canyon Road, we call the Conejo Wellfield. Historically, the Wellfield contributed about 60 percent of our local supply.

In 2018, the California Department of Drinking Water established a new maximum contaminant level for 1,2,3 – trichloropropane, a synthetic chemical used as an industrial cleaning and degreasing solvent. In the 1960s and ’70s, it also found its way into certain pesticides, some of which were used in the Santa Rosa Valley. “TCP,” as it’s known, is a relatively heavy compound, and sinks to the bottom of groundwater basins, where it accumulates. It’s also very stable, so even though pesticides containing it haven’t been used in decades, it’s still hanging around.

Camrosa began testing for TCP in 2018 when the new regulation went into effect. Upon discovering it at the Conejo Wellfield, the Wellfield was immediately shut down. TCP was not detected in any other Camrosa drinking water wells. The District engaged an engineering firm to help us determine the appropriate treatment and in 2019 authorized that firm to design a granular activated carbon (GAC) treatment plant. GAC is a fine-grained media that is put in large pressure vessels to filter out contaminants. Think of it like an industrial-size Brita filter. In our case, there will be six 12-foot-diameter vessels arrayed just west of the existing Wellfield a few hundred feet south of Santa Rosa Road. The project will also include storage tanks, a backup generator to ensure production during power outages, and associated equipment.

The Camrosa Board of Directors insisted that Camrosa ratepayers should not bear the costs of treatment for the contamination, and Camrosa successfully persuaded the manufacturers of the offending pesticides to pay for construction of the treatment plant.

With the completion this year of the GAC treatment plant and of Pleasant Valley Well #2 at Wildwood Park, as well as increased production at two other wells and the construction of pump stations to move groundwater into higher elevations, Camrosa is on track to use more local water than ever before.

See our Water Systems page for more information about where your water comes from.